It was an early start as Jason Murray takes the car off the line in 9th position at 6am Saturday morning. He immediately started picking up spots through the first lap. After the first lap out of main pit Murrays were up to 2nd physically going into the 2nd of 3 laps. “We had a clean run up until we lost brakes 1/2 way through the 2nd lap, says Derek. We held position up until we had a rookie mistake and our pits did not fill enough fuel and at mile 83 the car died. We were running out of fuel. All I could think about was all the time, effort and results of the past months were out the window. We had to think fast so I flipped fuel pumps and managed to swerve the car back and forth for several miles running 5 to 10 mph. We could see the pits in the distance but it was still miles away and the car kept dying. We limped along until we finally made it to the bottom of the lakebed at about mile 92, it the slowest 10 miles in our racing career.” 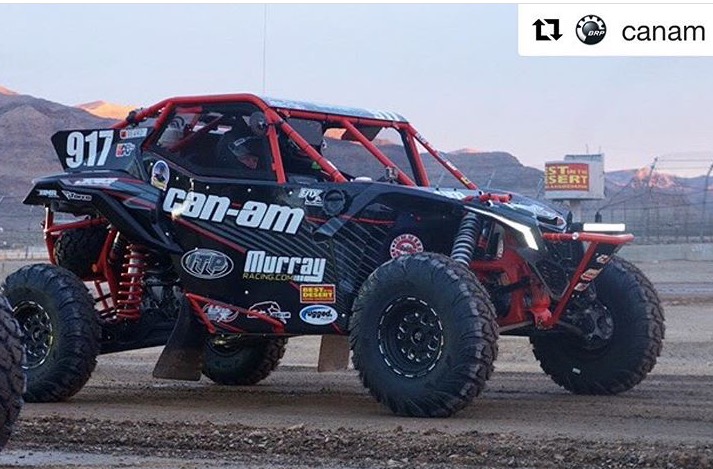 As the car came to a dead stop every last drop of fuel gone, Derek was hitting the steering wheel in pure frustration; he knew the day was over.  Then, out of nowhere, a BITD official who was working this section of the course walks over and asks what's wrong? They told him they ran out of fuel; they needed a tow off the course. The BITD official said, like some kind of Mint 400 Angel “it's your lucky day, I have 3 gallons!” It takes several more minutes to get the meager 3 gallons in the car. The X3 fired up and they were off but still needed to go nearly 25 more miles. After only 13 miles the car started to sputter. Good thing they were headed down hill and able to coast down into an alternate pit where 5 gallons of fuel were bummed. With over 20 min of delays we knew our hopes of 1st were out the window but now 2nd could also be lost.  Amazingly as the team pulled back into the race they still managed to be in 2nd!

Pulling into Main Pit after the long stressful 2nd lap, the car was looked over; brakes slightly fixed and with a quick driver change Jason took off for the last lap. He pushed the X3 hard for the last 116 miles with no issues and brought it in for a respectable 2nd place and 2nd overall out of 110 UTV’s. “This is the 47th consecutive BITD finish and we have finished the Mint in 1st, 2nd, 3rd, 4th and 5th in the last 6 years of racing the Mint 400” Said Murray.

They want to thank the crew and sponsors for all the support.

Find them back out at their next race, the Score International San Felipe 250.