Paso Robles, Calif. - March 18, 2016 - The Lazer Star Lights sponsored team of Jason and Derek Murray were back in action this past weekend as they took on the legendary Mint 400. It was a rough course that claimed many vehicles, but the Murray brothers’ commitment to consistency landed them a 4th place finish in the UTV Turbo class. Fellow Lazer Star racer Matt Lovell encountered a series of issues in the 7200 class, and was unable to finish the race.

“Normally it takes three to four weeks to prepare for a race, and this was our third race in four weeks,” Derek Murray said after the race. Following the BITD UTV World Championship and SCORE San Felipe 250 in the preceding weeks, the Murrays and their crew worked night and day to get their Can-Am Maverick Turbo ready for an important Mint 400. 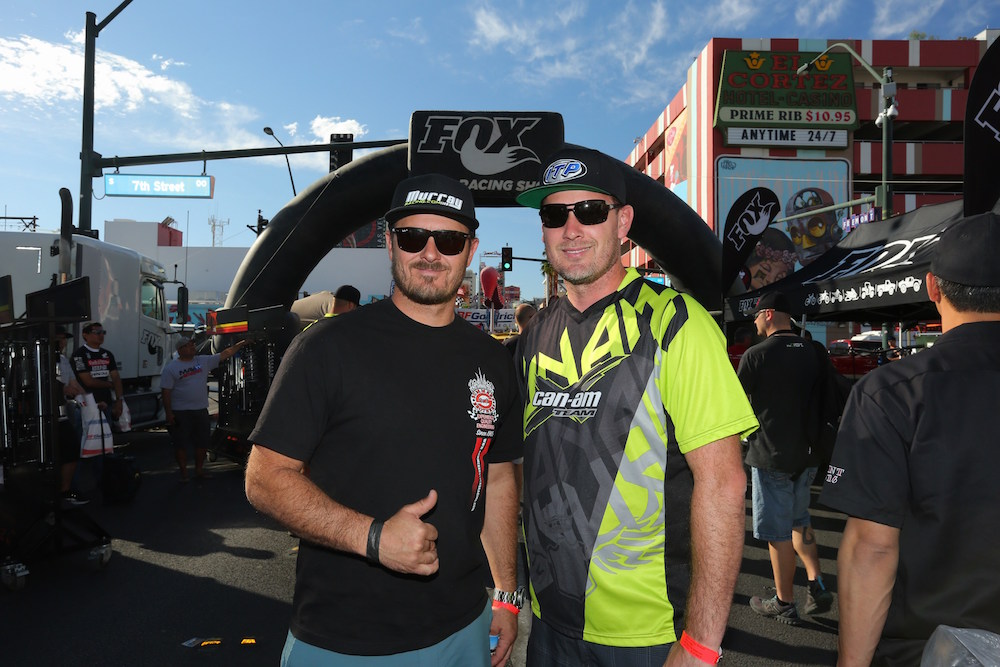 Derek started things off behind the wheel and within the first 30 miles was running up in the top five. With so little time to prep, the team’s strategy was to run a smooth race and stay within striking distance of the leaders. By the time Derek made it to the second of three laps, the course was deteriorated and was beginning to take its toll on the car. Derek backed off the pace a bit in an effort to avoid any mechanical failures, and handed off to Jason for the third and final lap.

Jason took the wheel in good position to make a run at the podium, however, the top teams had pretty clean races and did not create any opportunities for late passes. By that point, the car was losing some of its top speed, and after three challenging laps on a chewed up course Team Murray crossed the line in 4th place.

“All in all, we showed up prepared, the car ran well and we finished in the top 5 out of 76 UTVs,” Derek recounted. “Our goal is always to win, but all things considered we’re happy to finish the race and get some solid points. Now we finally have some time to break down the car and get it refreshed for the next race.” 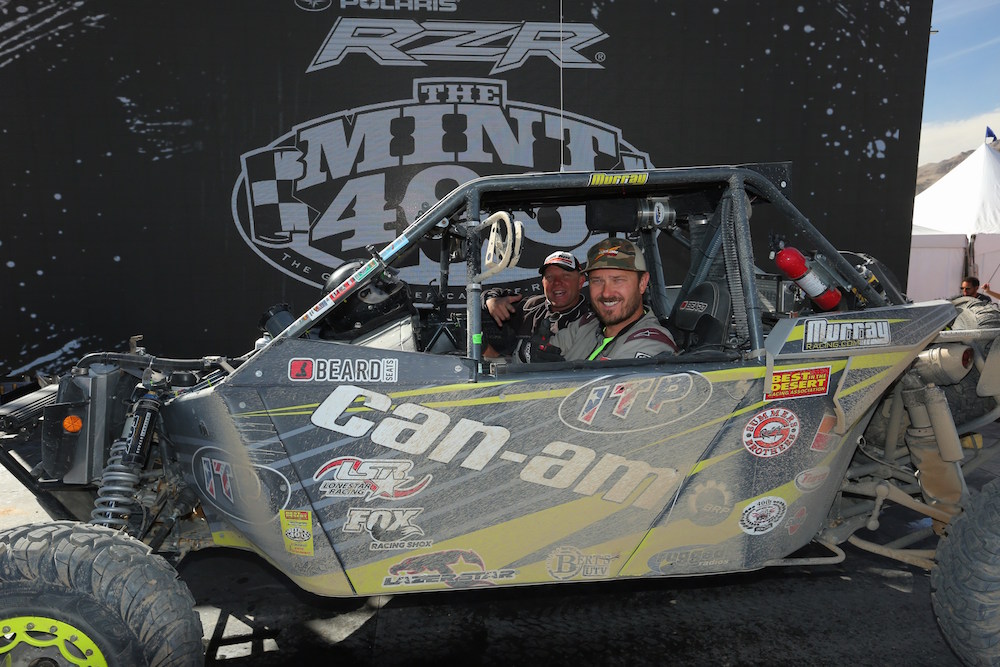 This was the 41st consecutive Best in the Desert race that Team Murray has finished without a DNF. The strong effort puts them in 2nd place in the season standings, and the BITD Laughlin Desert Classic in May is next on the schedule.

By the time the morning races had come to an end, more than 200 vehicles had run the course. Matt Lovell and his crew had spent the two previous weeks getting the Lazer Star Lights equipped #7244 mid-size trophy truck ready for action, but nothing could prepare them for what was to come. 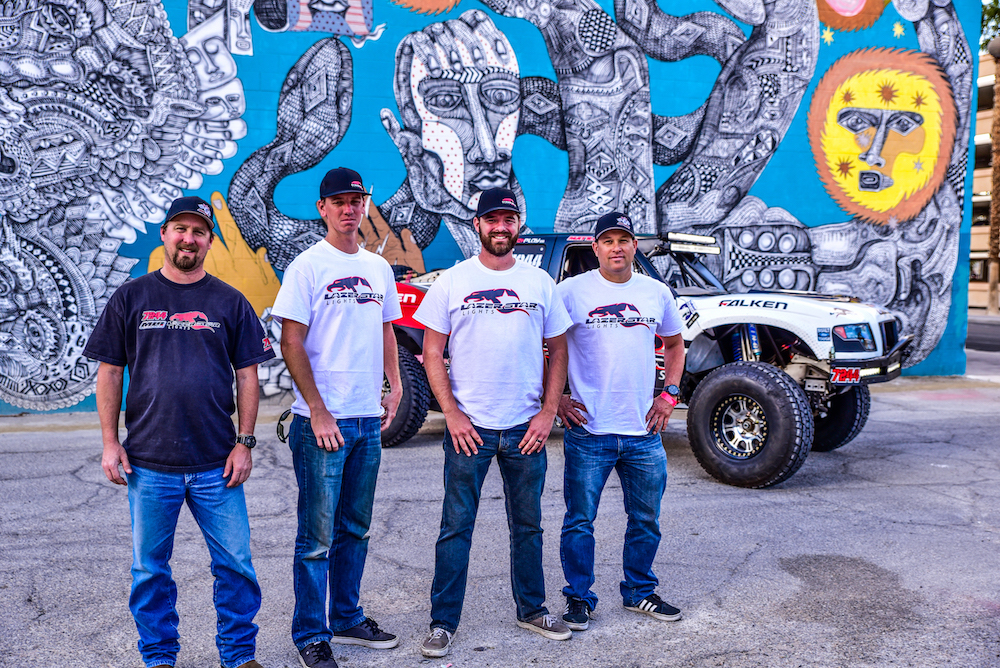 Lovell was first off the line in the 7200 class, but just a few miles into the race he and his co-driver realized they had gotten a flat tire at some point through a tight and rocky uphill section. When they went to change the tire, the jack handle broke off in Matt’s hand, the first of what would be several bizarre events. Shortly after changing the tire and getting back on course, Lovell’s truck got stuck atop a boulder. Upon jacking the truck to clear it from the obstruction, they discovered a gear oil leak. They made it to the pit and Lovell’s crew got to work cleaning up the damage.

After suffering another flat in the next section of the course, Lovell made it back to the main pit. By this point the course was turning into a junkyard, with trophy trucks and class 1 cars strewn about and suspension parts scattered on the course. They slowed their pace and focused on navigating the jagged rocks when they came upon a rolled class 1 car. As Lovell slowed down to help, a trophy truck came up along side of Matt’s truck, damaging the rear end and body work.

The co-driver of the stranded vehicle was badly hurt, so Lovell called in to have his crew call for a helicopter. Shortly after a BITD vehicle arrived and the helicopter was on its way to med-evac the injured racer. Lovell’s willingness to pull over to help saved several precious minutes in evacuating the injured racer. 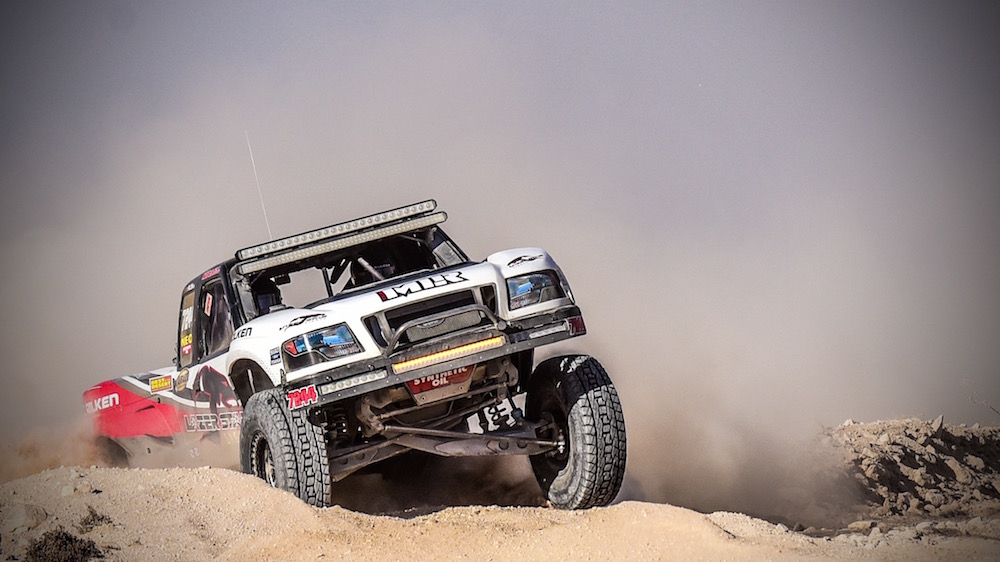 Lovell returned to the course, and soon after the 3rd member started to give out. They pulled off to inspect and realized that the truck was simply thrashed from a combination of rocks and collisions with other vehicles. Matt started breaking the truck down as his crew went to retrieve a replacement part, but the damage was already done. Matt did what he could to get back to the pit, but by that time he was forced to withdraw.

Lovell has his work cut out for him with extensive repairs and rebuilding to do in preparation for his next race. Lovell may race the BITD Laughlin Desert Classic, and after that will set his sights on Vegas to Reno in August. That will be the last race with this truck, as Lovell will finish his spec Trophy Truck for the 2017 season.