Dubbed the longest off-road race in America, the Best in the Desert Racing Association’s “Vegas to Reno” is a grueling 545-mile journey through the Nevada desert. The rough and dusty course knocked dozens of competitors out of contention, but both Lazer Star Lights sponsored teams persevered through the conditions to claim impressive finishes in their classes.

Murray Racing  |  Pro UTV  |  #1917
Brothers Derek and Jason Murray are well-respected in the racing community. Their dedication to hard work and preparation has not only earned them a good reputation, but it’s also resulted in some excellent racing performances over the past several years. However, after rough outings at the Mint 400 and Silver State 300, the Murray Brothers were looking to bounce back and put in the podium performance they know they are capable of producing. 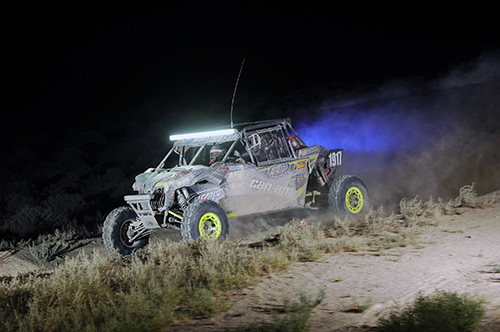 Derek started out behind the wheel in the 20th position. As he headed north for the first pit the Murray Racing Can-Am Maverick Turbo suffered a flat tire. At this early stage of the race, the repair time cost the team some precious time and positions. To make matters worse, another mechanical slowed the team down at around the 35-mile mark. “At that point I decided to drive smarter and just focus on making progress through the course,” Derek said after the race. “It was very dusty and the course was gnarly, so we stayed within the car’s limits but still pushed the pace.”

Derek made good progress during the rest of his leg, and passed the baton to Jason at Pit 8. As the sun went down, Jason knew he and his team stood at an advantage. Temperatures were dropping, meaning they could push their Maverick Turbo even harder without having to worry as much about overheating. “Our Lazer Star Lights setup was our other big advantage after sunset,” Derek explained. “While many drivers are backing off a little bit, we charge hard in the dark and use this opportunity to overtake the field.” 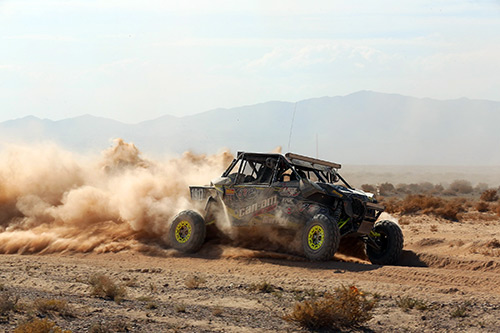 Jason crossed the line at around midnight, and Murray Racing claimed 2nd place in the Vegas to Reno race. Murray Racing is the only team to sit in the top 3 in both the SCORE and BITD UTV Pro standings, with throw out races. Derek continued, “The new turbo is a lot of fun. A ton of power and torque. After three races with it we feel like we’re getting it dialed in just right, so we’ll got out to the SCORE Imperial Valley 250 and try to defend our title.” The Murrays will then finish out the 2015 season with the BITD Bluewater and Henderson races as well as the SCORE Baja 1000.

Matt Lovell Racing  |  7200 Class  |  #7244
Matt Lovell represented Lazer Star in the field of mid-size trophy trucks, and “Everything went great,” Matt said after the race. “The truck was hammered after Mint so we took a lot of time prepping and basically rebuilding the truck.” 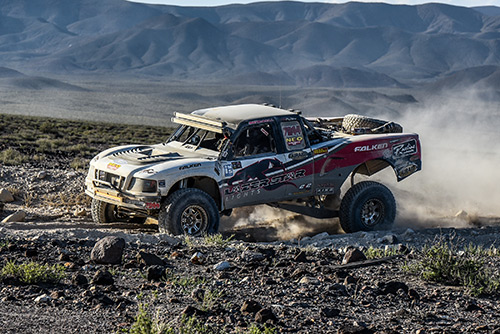 After months of preparation, Lovell who was one of very few drivers to  ironman this entire race solo, pushed the #7244 machine through the more than 500 miles of Nevada desert with relative ease. “It’s always a tough race and the course is always challenging,” Matt continued. “But this time through we were fortunate to not have any mechanical issues.” Lovell got stuck in a silt bed at around race mile 390, which sapped most of the energy he had left. That cost him almost an hour of time which equalled his time behind 3rd place. However, he  persevered with his Lazer Star Lights setup to continue charging hard after dark, coming in just before 1 am. 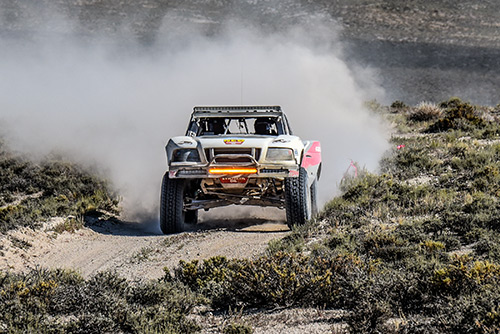 Lovell finished in a little over 14 hours, claiming the 7th place position in his class. “If it weren’t for the silt bed delay we were looking at a possible podium, but I’m proud of the crew and everyone who supports the team, and we were thrilled with how smoothly the whole race went.”