Lazer Star Lights sponsored racer Levi Shirley wowed King of the Hammers spectators and worldwide audience as he came across the line in third place in the premier 4400 pro class race. Shirley was one of just 17 out of more than 100 drivers to complete the course in the allotted time, and the only solo driver to do so.

The King of the Hammers has quickly grown into one of the biggest off-road events of the year, and is widely regarded as one of the toughest races in the world. Lazer Star Lights sponsored racer Levi Shirley didn’t let the build-up and celebration interfere with his focus and preparation. “All the time in the shop, the work with our sponsors,” Levi said after the race, “we put so much into this before we even hit the dirt. Other people might be there for different reasons, but we’re here to race.” 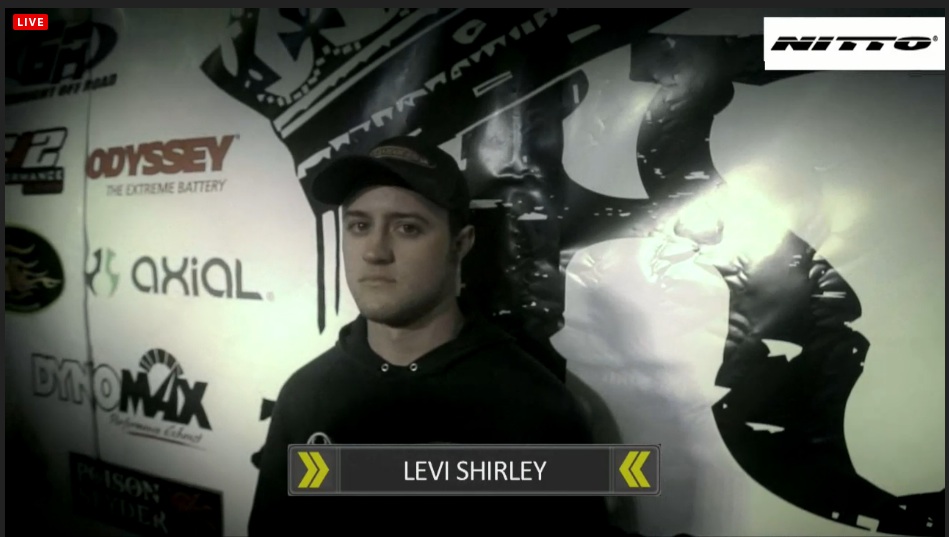 Despite what the results might lead you to believe, Levi’s day on the KOH course was anything but uneventful. “We had a little bit of bad luck here and there but overall it was a good day.” Levi had to battle some suspension issues throughout the race, making both the whoop-laden desert stretches and technical rock crawling sections extra difficult. 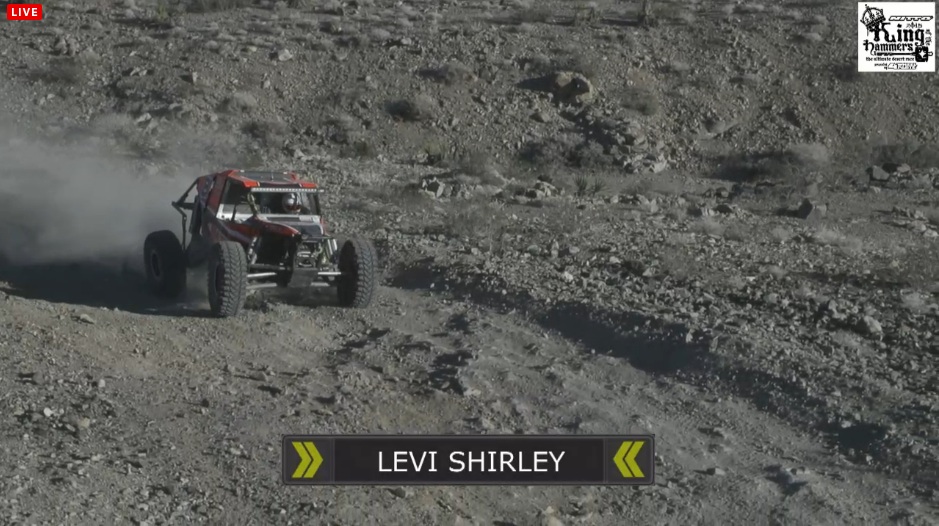 Still, Levi got off to a solid start, running in the front of the pack after the first lap through the major rock beds. Levi avoided the major traffic jam that built up on Jackhammer within the first hours of the race. “We really emphasized qualifying, and I qualified 8th which got me an early start. That lead over the rest of the cars really helped us get through the rock beds before they got too hairy.”

The next bit of bad luck came on lap two, when Levi was working on Wrecking Ball. “The car got wedged so I had to get out to run the winch line, but the winch wasn’t working,” Levi recalled. “I got through without winching and discovered the top half of the winch had broken off.” The Lucky Dog pit crew removed the broken winch at Pit 2A, and by the time Levi made it to Pit 1, the crew had repaired the winch with some parts borrowed from a spectator. 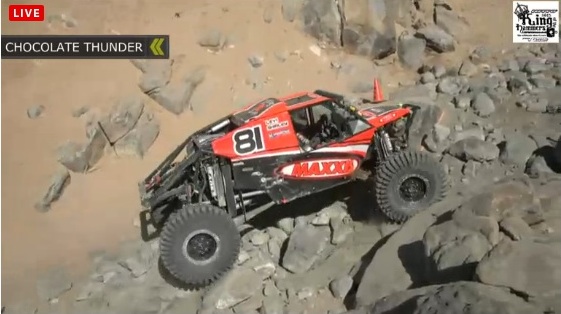 Fortunately for Levi and the other front runners, race coordinator Dave Cole made the decision to detour the race leaders on their second lap through the rock beds. By that time, Jackhammer had become a parking lot as roughly 50 cars either struggled to ascend the mountain or waited impatiently for the cars ahead to clear out. “My crew radioed me about the detour but I didn’t really understand what they were saying, the engine was loud and they were a bit garbled. I was a little surprised but relieved when I got to the checkpoint and Dave Cole explained that we were bypassing Jackhammer.”

In a race that requires so much winching, it seems odd that a racer would take on the challenge solo, with no co-driver to help run a winch line. “This was my 5th year running KOH, but the first time going solo,” Levi explained. “We actually built this car with the idea of running these Ultra4 races solo. This let us play with the geometry of the car, allowed us to make it a little narrower which makes for easier navigation through the rock beds. Most Ultra4 events don’t require quite as much winching, so we have a good setup going into the other races.” 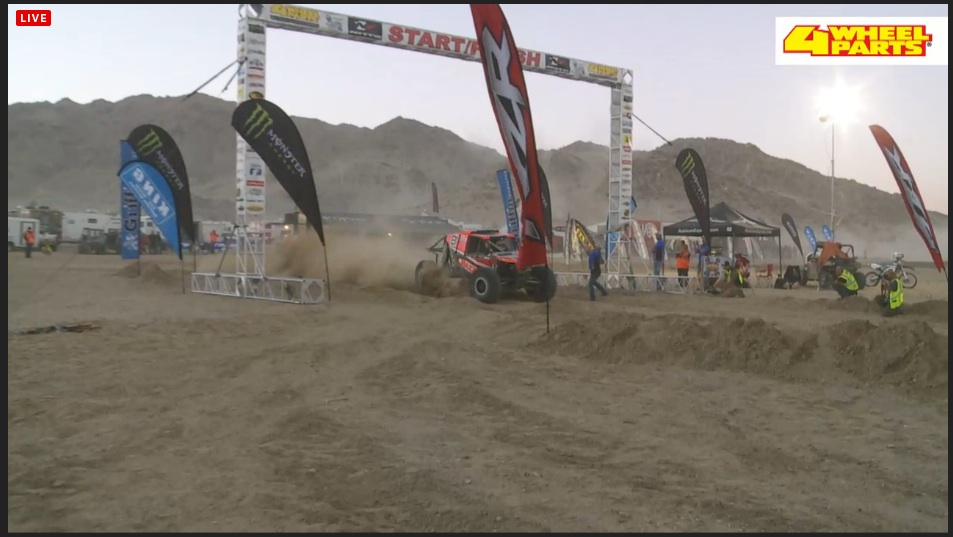 At the end of the day, after 9 hours in the car battling for the top spots and fighting the menacing King of the Hammers course, Levi crossed the line in physical third place. Levi was confirmed as the official 3rd place finisher of the 2015 King of the Hammers, one of just 17 out of the roughly 130 entrants and the only solo driver to complete the course. 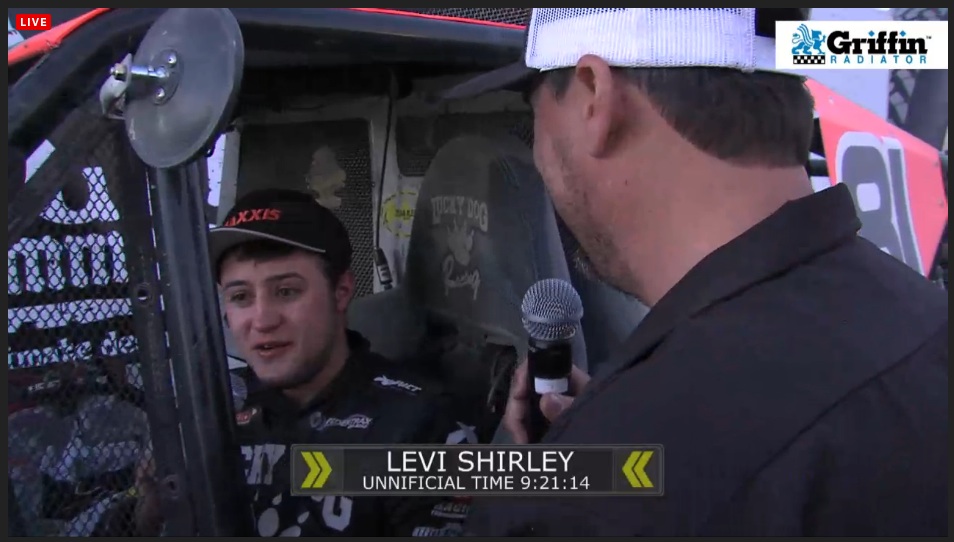 “I’m incredibly grateful to my sponsor Lazer Star Lights,” Levi said. “Their support means the world to me, and even though I finished before sundown, knowing that I have this light setup gives me extra confidence throughout the race.”

Levi will once again be racing both the East and West Ultra4 Regional Series this year, as well as the Ultra4 Europe Series. Lucky Dog Racing will next prep the Maxxis Tires car for the MetalCloak Stampede, held May 8-9 in Sacramento, CA. The team will then travel overseas for the first round of the 2015 Ultra4 Europe series in France May 22-24. Levi’s father and owner of Lucky Dog Racing, Brian Shirley, will also be participating in Ultra4 East Regional events this year. Be sure to follow @LeviShirley on Instagram and Twitter, and check out the Lucky Dog Racing Facebook page for more updates on Levi’s races this year.