Lazer Star Lights racers took on the daunting Best in the Desert "Vegas to Reno" race this past weekend, and after more than 500 miles of desert dust Murray Racing managed a third place podium finish. 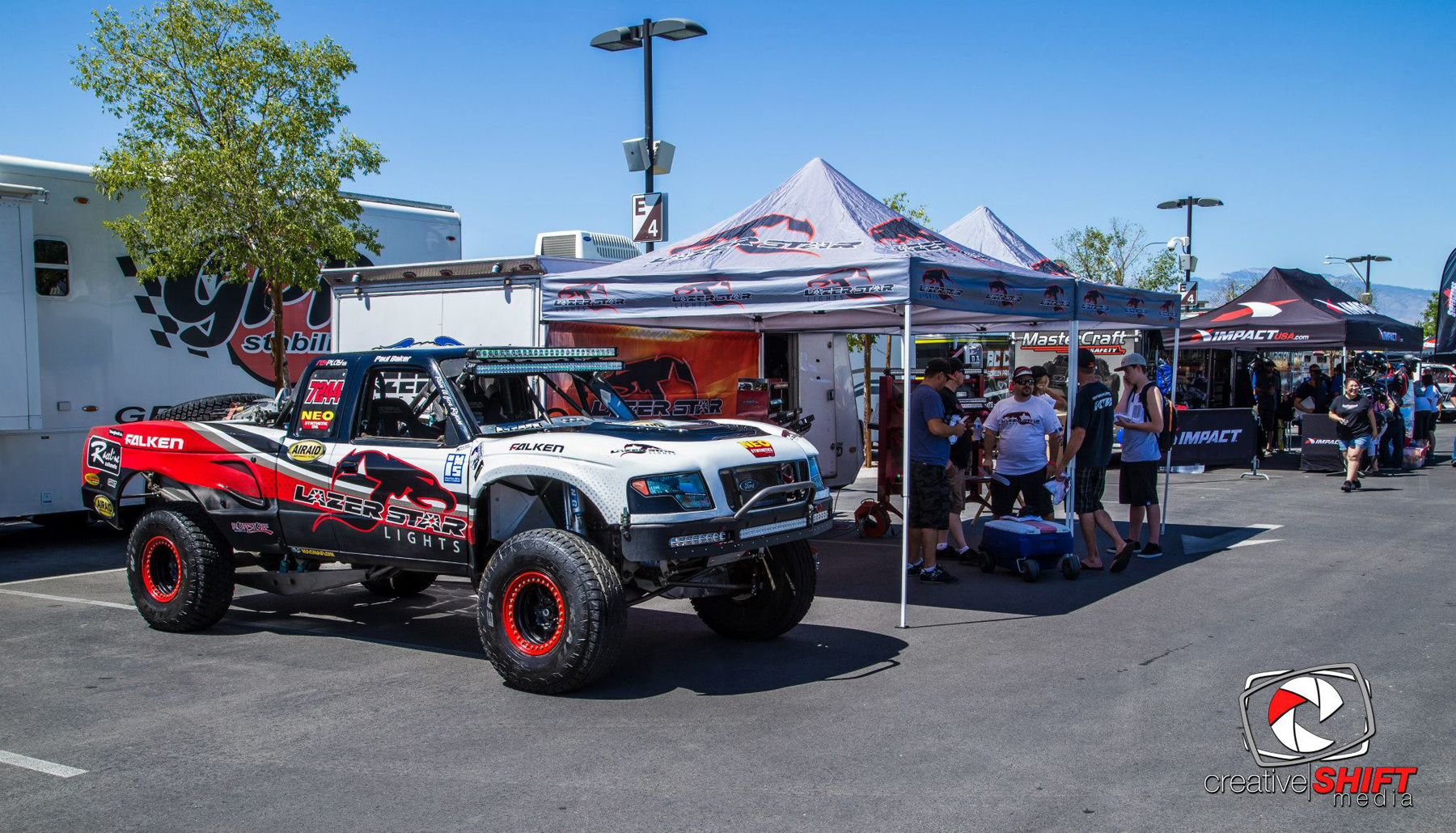 Murray Racing
The Murray brothers have enjoyed plenty of success so far in the 2014 SCORE series, but with 28 consecutive BITD finishes headed in the 2014 Vegas to Reno, there was still a lot left to prove. "We go into every race aiming for the win," says Derek Murray, "but after starting mid-pack and fighting through hours and hours of dust we're happy with a podium." 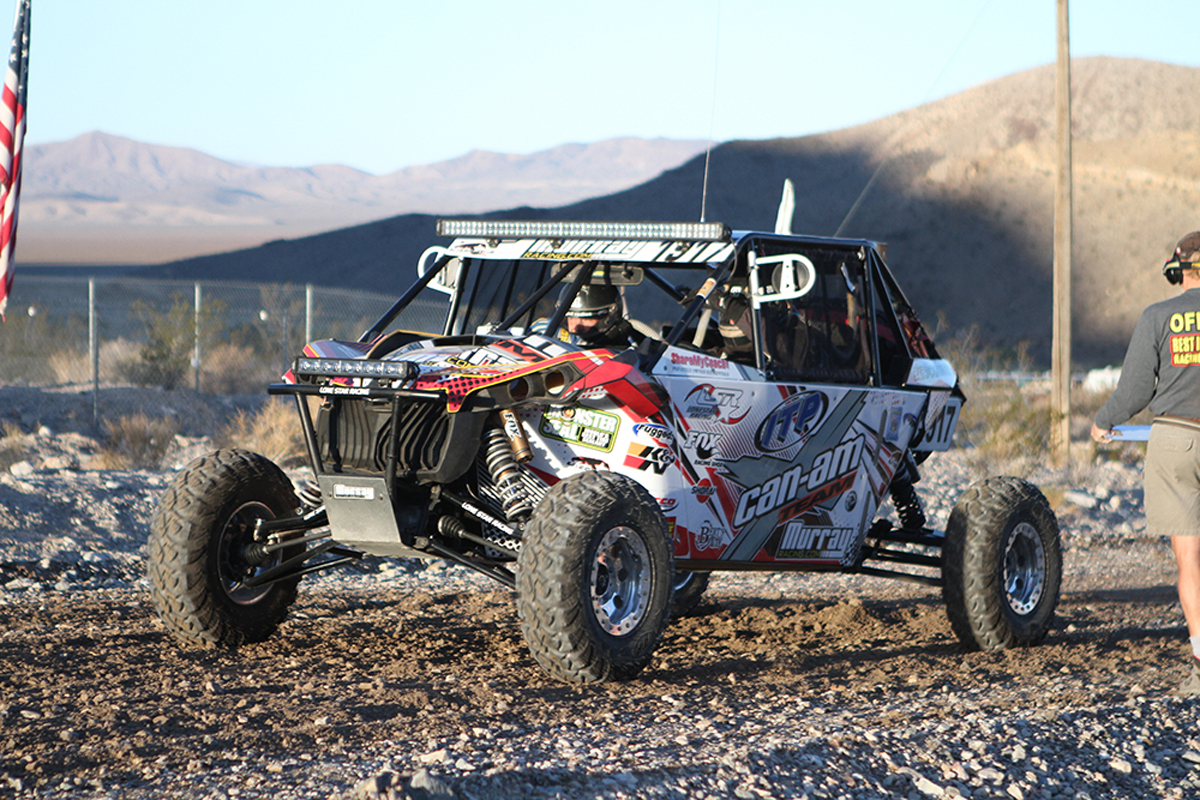 Derek started off in the driver's seat as team headed out of Vegas, 18 cars behind the leader. By the time Derek handed off to Jason, he had cut through the field all the way up to 7th place. Jason was comfortable behind the wheel in his first BITD race since returning from injury. He managed to pick off a few more spots and worked his way into 4th before Derek took over for the final stretch. Derek proved once again that Team Murray is most dangerous in the final stages of the race as he knocked off one more car on the way to claiming the last podium spot. This was the fourth podium finish in five Vegas to Reno races for Team Murray. 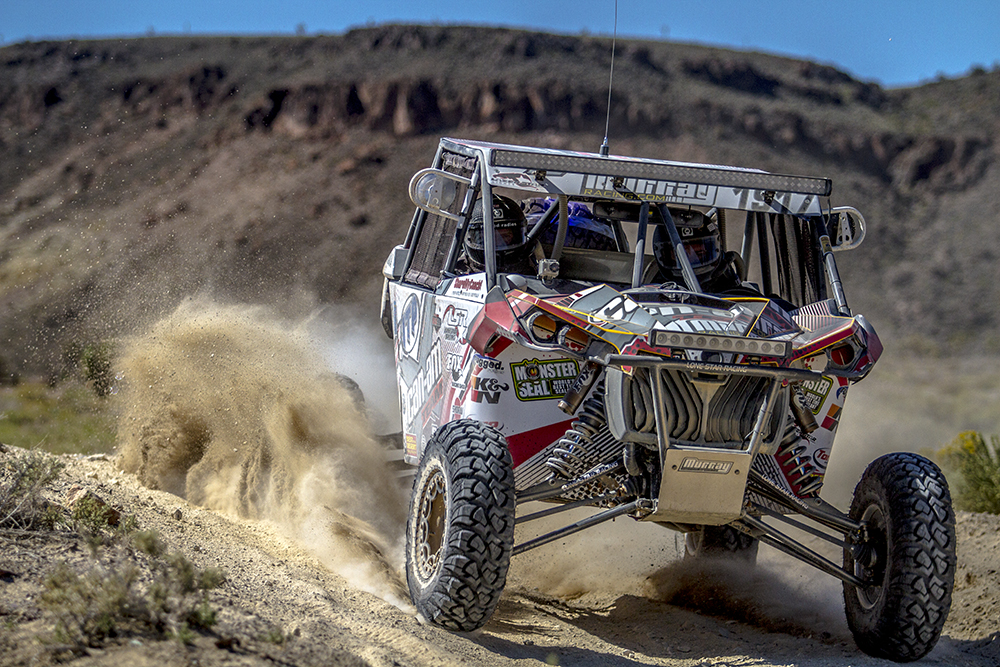 All in all Vegas to Reno was a pretty smooth race for the Murray boys in the #1917. "The Can-Am ran clean, we didn't really have any problems," Derek continued. "We finished before dark so that wasn't an issue, but we did put our Lazer Star Lights to use when passing bikes and quads. With the amount of dust that was in the air it was very important that we could not only see, but be seen by the other racers." 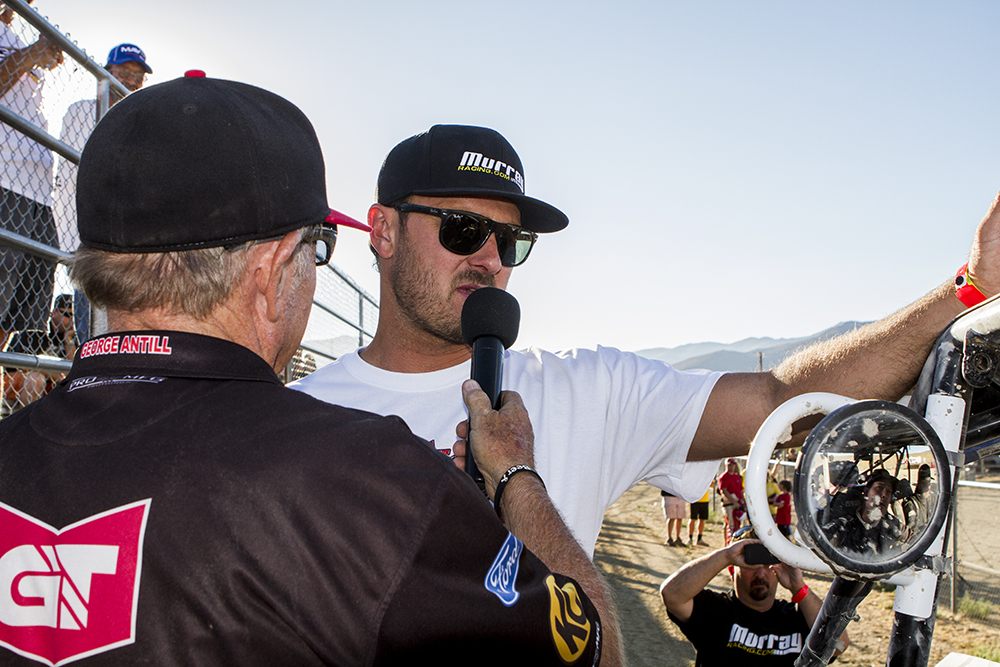 Matt Lovell Racing
After months of preparation, Matt Lovell and company rolled into Las Vegas for the 2014 Vegas to Reno race. Matt and his co-driver Paul Baker took off from the line at the back of the pack, so they had their work cut out for them from the start. 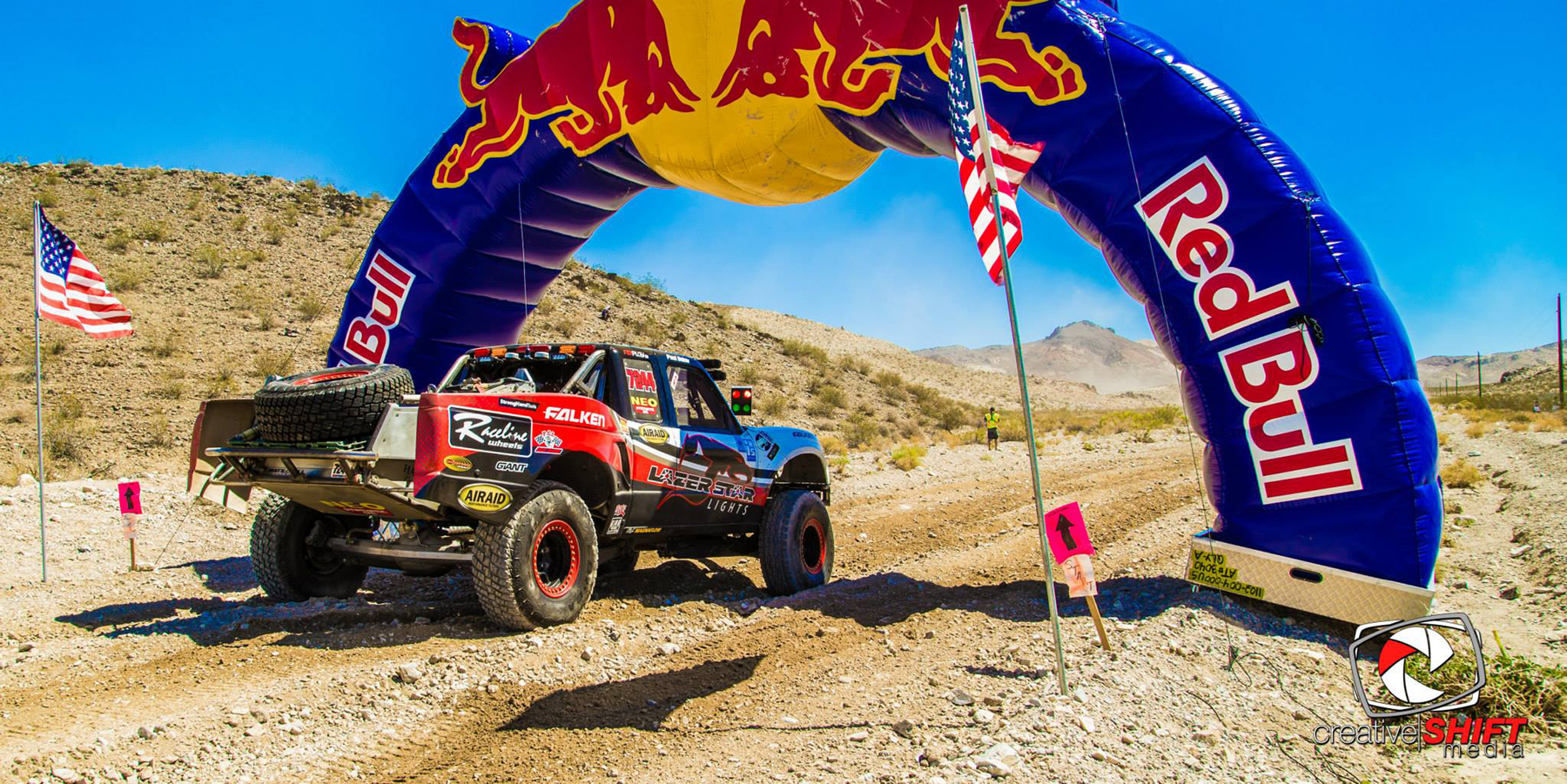 In the first 40 miles alone Lovell charged the #7244 Lazer Star Lights / Matt Lovell Racing mid-size trophy truck through a rocky and silty course, picking off racers left and right. "We were flying out there," Lovell said after the race. "The truck was running perfectly, the pit crew was extremely fast, everything was coming together." By the time they hit the halfway point they were up to 5th place, and then disaster struck. The truck's hydraulic throwout bearing failed, rendering the clutch pedal useless and leaving Matt unable to shift gears. 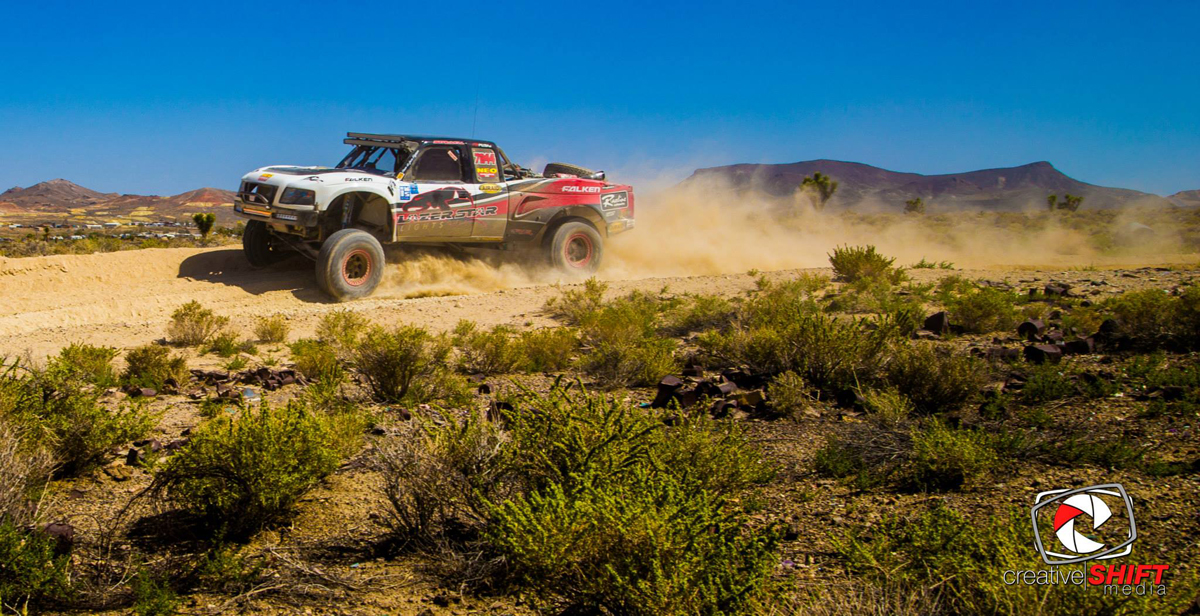 "Unfortunately it was just another stroke of bad luck, a part that never breaks took us out of the race," Matt said. With no spare part handy, the crew did everything they could to try to get back in the race, even going so far as driving town to town looking for a replacement at local auto shops. "The whole MLR crew did an amazing job. I'm really proud of how the entire program has grown, despite the obstacles we've faced this year."

Lovell and the Murray brothers will now prepare for the next race on the schedule: the BITD Bluewater Desert Challenge, October 10-12 in Parker, AZ. Learn more about Lazer Star's extensive lineup of off-road and race lighting at LazerStarLights.com. Find Lazer Star on Facebook, subscribe to their YouTube channel, and follow @LazerStarLights on Twitter and Instagram for more updates and special offers. Thanks to Creative Shift Media for the Team MLR photos.